Proboscidea and Dicyphini: An example of spontaneous mutualism by a population of predatory bugs inhabiting a sticky plant

A population of the mirid-bug Dicyphus errans (Miridae) a species occurring in Europe, colonized a group of Devil’s Claw (Proboscidea louisianica subsp. fragrans (Martyniaceae)) native to the USA and cultivated in a garden in Germany. More than 20 individuals of these predatory bugs have been found living and moving freely on these sticky plants, feeding on stuck victims, while garden ants (Lasius spp. (Hymenoptera)) trying to place aphids for “sugar farming” became captured together with their “productive livestock”, as do small flies and bees. The observations on this spontaneous mutualism between the American Devil’s Claw and a small mosquito-like European mirid-bug has been recorded on video (Hartmeyer 2022). This constitutes an additional example for the adaptation of these ubiquitous predatory bugs to feed on the prey of sticky plants that would usually capture small-sized insects. The American Frank Obregon (2017), who found native mirid-bugs on his cultivated Roridula (Roridulaceae) in California, called the phenomenon assisted carnivory, which fits quite nicely. Proboscidea as well as Roridula do not produce digestive enzymes, so they cannot benefit directly from their diverse captured prey. But as soon as predatory bugs colonize the plants and feed on the sticking prey, their droppings provide a suitable fertilizer to be absorbed by the stomata of the leaf. A perfect mutualism. In addition, some historic facts on bug-plant interaction are provided. 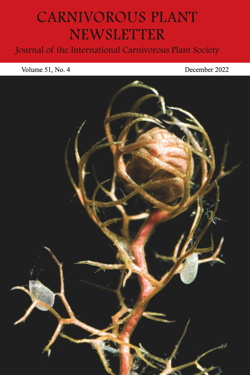