Seven species of the carnivorous plant genus Heliamphora were studied in the wild across four tepuis of the Venezuelan Guyana. All were found to exhibit UV-induced blue fluorescence in their young and developing pitchers, the fluorescence being largely confined to the downward-pointing trichomes of the pitcher interior, with a small contribution from the nectaries. Subsequent work on cultivated plants confirmed the universality of this trait across all known members of the genus. Fluorescence microscopy localised the blue emissions to the surface of the trichomes and unequivocally showed that it represents true fluorescence. The phenomenon was found to be highly transient, generally being seen only in recently opened pitchers. Whether it has a biological function or is an incidental property remains to be determined. Possible roles in the attraction of prey and pitcher inquilines are discussed. 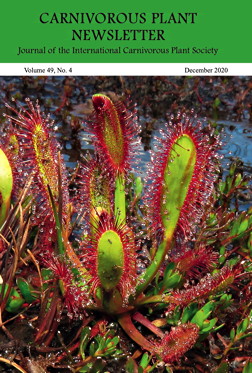