Evolution of the Cephalotus pitcher

Cephalotus follicularis (Oxalidales) is a carnivorous plant native to coastal southwest Australia with pitchers that primarily trap ants. The plant also produces non-trapping foliar leaves and occasional intermediate leaves. Close observation of the intermediate leaves plus an understanding of leaf development in angiosperms shows that the pitchers appear to be constructed from five leaflet-equivalent developmental domains that are not separately visible in the pitcher leaf primordia but do map to specific locations. The pitcher development patterns are similar to those of Oxalis leaves. Simple developmental shifts can explain the evolution of the pitcher. The pitcher body appears to have evolved from the three leaflets typical of most Oxalis species and the lid from two leaflets that arise above the adaxial face of the petiole in a way similar to the adaxial leaflet of Oxalis tetraphylla. However, since the lineage consisting only of Cephalotus today is 80 million years old, when and how it became carnivorous and developed pitchers remains speculative. 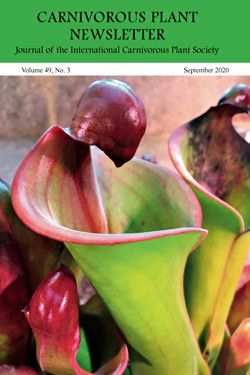