Pinguicula lignicola had been described as “viviparous” but no evidence had ever been presented, nor clarification given, as to the type of vivipary displayed. Early reports of young plants or stalked-seeds present within the bell-shaped calyx (with the implication that the capsule has opened) implied that false vivipary might be occurring, later tentatively considered in our early but superficial observations. We extended those observations to conduct more detailed investigations of P. lignicola and P. casabitoana, previously described as very similar. Our study demonstrated new similarities. In particular, we provide detailed evidence to confirm that both species exhibit true vivipary, the diaspores of these two species being seedlings, not seeds. In addition, we present evidence that the seeds undergo cryptocotylar germination, the first occasion on which this has been reported in Pinguicula. We also identify that fixation of a seedling to a phorophyte depends on its attachment by root hairs; these two Pinguicula do not exhibit roots before or during fixation, by the time the cotyledons have fully emerged, or before the first eophyll emerges. 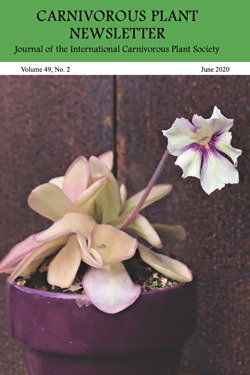