The Japanese sundews that have previously been collectively called D. indica L. (especially after the influential Flora of Japan, Ohwi 1965:492) are being split up. Various authors (e.g., Watanabe 2013) are trying to re-establish or create one or two additional species assumed endemic to Japan, following the contemporary trend to recognize a number of segregate taxa in Drosera sect. Arachnopus (Greek for “spider leg”), the group that contains D. indica. Previous research (Schlauer et al. 2017, 2018, 2019) has demonstrated a rather unexpected diversity in the naphthoquinones that are characteristic for the different species now recognized in this group. While a few Australian species contain ramentaceone (7-methyljuglone), most contain the regio-isomer plumbagin (2-methyljuglone). So far, only D. indica s.str. (accessions from Asia and Africa have been investigated) contains both isomers in the same plant. The morphological diversity found in Japan thus prompted a chemical investigation, the results of which are reported here. 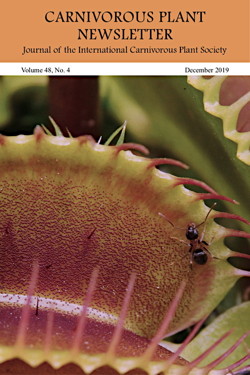