The northern, tropical part of Australia is inhabited by numerous sundew species, of which most are endemic (Brewer & Schlauer 2018). In northernmost Western Australia and the Northern Territory these species predominantly belong to Drosera sections Lasiocephala Planch. (D. banksii, D. subtilis, and the “D. petiolaris group” or “woolly sundews”) and Arachnopus Planch. (the “D. indica group”), while in northern Queensland a further section (D. sect. Prolifera C.T.White, the “rainforest sundews”) of species with rosetted sessile (D. adelae F.Muell. and D. schizandra Diels) or petiolate leaves (D. prolifera C.T.White) adds to this diversity. Drosera sect. Prolifera is closely related to D. sect. Arachnopus (Rivadavia et al. 2003; Fleischmann et al. 2018a) but the plants are perennial and they prefer shaded or even forested situations at colline (200-500 m alt.) to montane (500-1000 m alt.) elevations, while the “Indian sundews” are annuals of sunny, usually lowland places. The distributional ranges of the three species of D. sect. Prolifera are geographically well separated from each other, and no native hybrids are known. Nevertheless, the artificial hybridization of D. prolifera and D. schizandra was successfully performed by Kamil Pasek in the Czech Republic. Unfortunately, the hybrid has not been described formally, so no cultivar name was established (it is, however, commonly on sale under the informal name “Andromeda”). 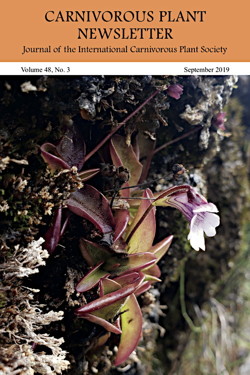