Evidence of motile traps in Byblis

Byblis Salisb. is a small genus of carnivorous plants with adhesive traps in the Lamiales family Byblidaceae Domin. There are two perennial species (B. gigantea Lindl. and B. lamellata Conran & Lowrie) with restricted ranges in Western Australia, where they experience a Mediterranean climate. The critically endangered B gigantea is endemic to the Swan River drainage area, now entirely within the Perth metropolitan area, whilst B. lamellata is restricted to the coastal region North of Perth. The genus also contains six currently recognized annual species (B. aquatica Lowrie & Conran, B. filifolia Planch., B. guehoi Lowrie & Conran, B. liniflora Salisb., B. pilbarana Lowrie & Conran, and B. rorida Lowrie & Conran) which inhabit the tropical and semi-arid regions of Northern Australia. The genus also extends to the island of New Guinea (Lowrie 2013; McPherson 2010). All species are found in substrates which are very nutrient-poor (Lowrie 2013; McPherson 2010) and share habitats with representatives of other genera of carnivorous plants (particularly Drosera, but also Utricularia and Nepenthes). Although there are important morphological differences between the Byblis species, all share the same basic structure in that they produce stems from which radiate filiform leaves. Another feature common to all species is the ability to produce fast concentrated growth in response to seasonal rainfall. (Bourke, pers. comm.). It has been observed on many occasions that all Byblis species play host to Miridae bugs from the genus Setocoris (Bourke, pers. comm.). A mutualistic relationship has been proven to exist between another viscid plant genus Roridula and a different genus of the family Miridae, Pameridea (Anderson & Midgley 2003). A similar relationship is strongly suspected in Byblis (Lowrie 2013; Cross et al. 2018). 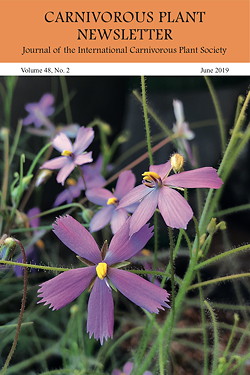