Sarracenia hybridization and genetics have been my interest since early 1990s. A cultivar looking like Sarracenia ‘Adrian Slack’ was my dream plant for a long time; I wanted to create such a plant and name it after my wonderful wife. When I opened the envelope with December issue of CPN in 2000, my jaw just fell to the ground: “Somebody else made it!”. I read immediately that this splendid cultivar was named after Adrian Slack and it is a natural creation in fact. Although it has been nearly 20 years since Sarracenia ‘Adrian Slack’ (ADS later in text) was described, it is still one of the most elegant Sarracenia cultivars. It was obvious to be a superior clone of natural hybrid between Sarracenia flava and S. leucophylla. According to its original description ADS has inherited its fenestration after S. leucophylla and deep red veins after S. flava (Hanrahan & Meyers- Rice 2000). Heavily veined types of S. flava (as putative donors of intense venation) are referred to as Sarracenia flava var. ornata (Hort. Bull ex W. Robinson). 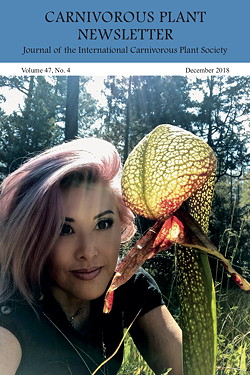