The two species of Roridula are medium South African shrubs capable of trapping various small organisms on their resinous leaves. In its native range, the genus Roridula has been noted by various authors as having co-evolved with Pameridea spp. (Miridae) “mirid bugs” in an arrangement that allows the bugs to feed on the trapped insects, and for the plants to gain nutrients from the insects it traps via fecal fertilization courtesy of the mirid bugs. A third organism, a spider (Synaema marlothii), serves as a limiting factor on the Pameridea populations and is endemic to Roridula spp. in South African fynbos. This somewhat complex structure of inter-dependence was thought to be limited to the previously discussed three species through a textbook-perfect example of co-evolution and co-dependence between the aforementioned three organisms. However, after recent observations by the author in Southern California, it appears that this commensal organization of [Roridula + Miridae + spiders] is less rigid in terms of which species participate than previously thought. In a broader sense, these and other to-be-discussed observations point to the idea that “assisted carnivory” in plants via generalist Miridae interaction is much more common than previously thought, and that mutualism between plants and Miridae bugs deserves greater scrutiny. 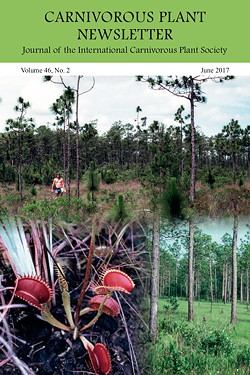