Triggerplants (Stylidium spp.; Stylidiaceae) grow in Australia and a few areas to its north, though >95% of the >300 species in the genus Stylidium are endemic to Australia. Their name comes from the extremely rapid, active, and resettable pollination mechanism which they use. In addition, they have been recently recognized as possessing at least some of the traits of carnivorous plants, specifically the ability to trap and digest prey insects, as well as the more recently-demonstrated ability to transport and, therefore, benefit, from nutrients obtained in that way. Generally, they trap prey which are much smaller than their pollinators. Triggerplants typically are found in extremely nutrient poor conditions where genera such as Drosera and Utricularia are usually found in the same places. 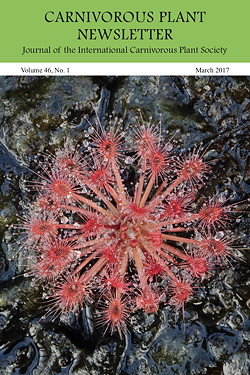