Biology of the trapless rheophytic Utricularia neottioides: Is it possible to grow this specialized species in cultivation?

The nearly trapless aquatic bladderwort Utricularia neottioides is one of the most remarkable and curious Utricularia species, growing attached to bare rock in streams of South America. It has never been cultivated due to its rheophytic habit and unknown ecological demands. As late as in 2012, one of us (KP) was able to grow this species in tissue culture from seed, so that the species has become available for cultivation and for anatomical and ecophysiological investigations. In this paper, we describe the biology of the species based on observations made in natural habitat and cultivation, its growth in in-vitro and ex-vitro, and raise the question whether it can be grown long-term ex vitro at all.

Lubomír Adamec and Andreas Fleischmann and Kamil Pásek. 2015. Biology of the trapless rheophytic Utricularia neottioides: Is it possible to grow this specialized species in cultivation?. Carniv. Pl. Newslett. 44(3):104-114. 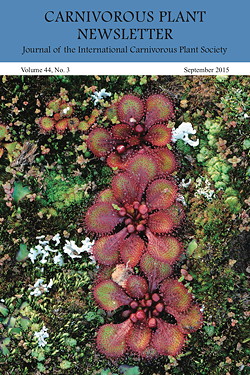